The Top Thing to be Honest About Before You Delegate

Ramon booked a Wise Help Session to have me help him figure out what he should be delegating. His VA and he had just parted ways because, as she explained, he had unrealistic expectations about what he was delegating.

As we talked, it became clear to me that it wasn’t that he needed help with what to delegate, but that his need seriously outpaced his financial resources. The simple truth, one Ramon didn’t want to face, was that he had far more work than he could afford to pay someone to do for him. And, he’d been so blind to the disconnect that reality presented that he’d ardently tried to get his VA to deliver the impossible. To his credit, as we talked he realized that he’d burned a bridge with her by pushing her and even blaming her when everything he wanted to have done couldn’t get done in the time he’d contracted her for. He shared that she’d told him on several occasions that what he wanted wasn’t realistic in the amount of time they had together, but he’d blown past that and pushed harder, ultimately leading to her ending the relationship.

I get it. There’s a pain point at the intersection of all that needs to be done, and the realization that your revenues can’t pay for someone (else) to do it all. It’s even worse when you can’t see the disconnect and you keep driving forward, anyway.

I see this a lot; when people come to us to get a referral to one of our crackerjack VAs, often they’ll say they need five or ten hours/month, and then share a list of the things they’d like to delegate and get done that realistically requires significantly more time than that. 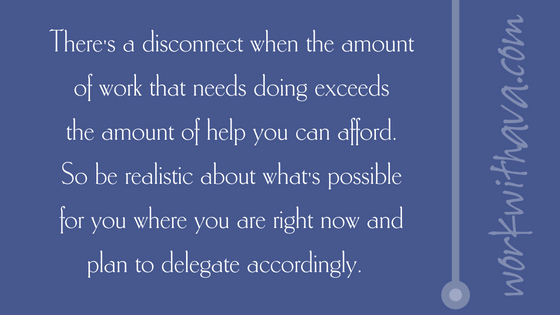 If this sounds familiar to you, the fix is in being honest with yourself. If you can only afford so much, stop thinking about delegating it all, all at once. Right now, you’re likely doing things yourself. And that means that you can continue to do that if you need to. And you do need to when you can’t afford to pay someone to do it for you.

In my view, when you need more than you can afford, the overall best solution is to keep doing part of it yourself, and give your VA the pieces that you absolutely cannot do or absolutely hate to do (and therefore probably don’t do) and that will be the most helpful to you. Chief among the helpful ones will be watching your efficiencies. If your virtual assistant can figure out how to make you even a little bit more efficient by changing a system or process, she’ll save you time and possibly money, either of which can be used on something else you need to delegate. See where I’m going with that?

As your business grows, and you can afford more, delegate more and let her kick in ideas about efficiency all along the way (which may, incidentally, involve growing a team around your work so that you get the best skills—hard and soft—for your delegating dollars). Over time, you’ll be able to give up all of the things you shouldn’t be doing.

Look, I’ve considered this six ways to Sunday. There are interns. There are very-part-time employees. There are moms down the street who want to work while their babies nap. But at the end of the day, none of those options are good because they will ultimately cost you every bit as much as working with a VA—either in dollars or time (and maybe both!).

So be honest about what’s possible, start where you are, and delegate what’s smartest to delegate and that can be done in the time you can afford to buy. Keep doing the rest. And work towards letting it all go. That’s a more realistic approach, and the only one I know of that won’t break the bank in any context. 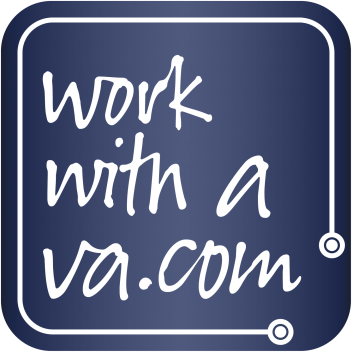